Described by RAF Cosford Air Show Chairman Wing Commander Mike Cook as one of the RAF’s “Gold” Events in its centenary year, the event will be the first airshow of the RAF100 year and promises to be one of the outstanding highlights of the UK Airshow Calendar. Planning for this very special edition of the popular West Midlands airshow has been underway for well over a year and in mid-April the station and event organisers revealed their plans to the media.

Paul Johnson/Flightline UK reports. All photography by the author.

2018 promises to be a very special year on the airshow circuit. The centenary of the Royal Air Force will be a focal point for many events around the UK during the summer. The RAF Cosford Air Show is currently the only airshow in the UK to be organised by the Royal Air Force and will be one of the biggest public events within the RAF100 year.

It is a special year for Cosford itself as the station marks its own 80th Anniversary. Opened in 1938 as a maintenance base, Cosford has and continues to play an important role in training the next generation of RAF personnel in a diverse range of trades from engineering to physical education. The airfield on the station remains active with the resident University of Birmingham Air Squadron, the Wrekin Gliding Club and the Midlands Air Ambulance all flying from the Shropshire base.

As one of the few airshows in the West Midlands area, some 60,000 visitors are expected at the airshow and will witness an event that will reflect the RAF100 themes of “Commemorate, Celebrate and Inspire.” Cosford will tell the story of the Royal Air Force from its genesis during the latter stages of the First World War through to its future both in the air and on the ground on a grand scale. . Station Commander RAF Cosford, Group Captain Tone Baker, said “We are delighted to be hosting our biggest and best ever Air Show this summer. 2018 is a special year as we mark RAF100 but also RAF Cosford itself celebrates its 80th birthday, and there is no better way for the public to get involved than coming along to the Air Show and see behind the scenes of an active Royal Air Force station.” 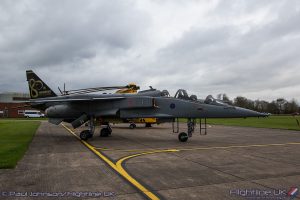 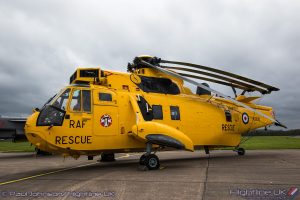 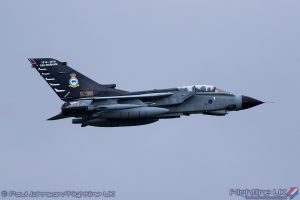 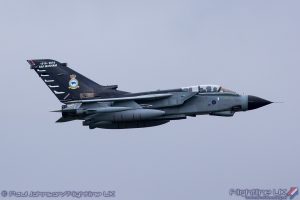 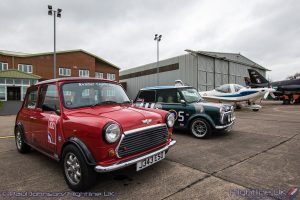 Though the Cosford organisers will maintain many of the unique as aspects of the event from previous years, the RAF100 theme does mean the event will enjoy extra support as Wing Commander Mike Cook explained in opening the launch, “[RAF100] means we get to put on what we think is a bigger and better show this year, and we’re very excited about what we’re hoping to achieve. RAF100 is a way to commemorate the individuals and events through history that we are proud of as a service. We’re celebrating the men and women that make up the RAF today. We’d also like to inspire, promoting to the young people of today science, engineering, maths and technology”

On the ground, the aircraft static display will be bigger than ever and reflect the development of the RAF though themed villages and zones. The “RAF Story” starts at the western end of the showground with the first “Vintage Village” themed as “Policing the Empire.” As well as First World War era aircraft, the Village will also feature living history groups to give visitors a real feel for the challenging early years for the RAF. 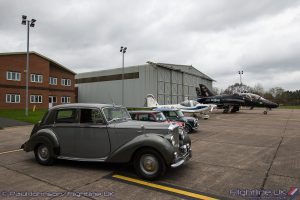 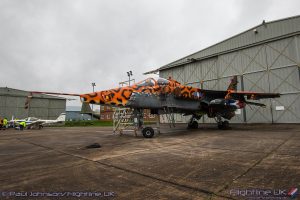 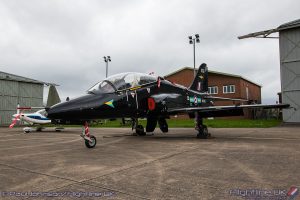 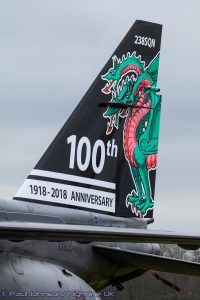 Perhaps the standout area of the static display will be the “Age of Uncertainty” Zone which reflects the Royal Air Force’s contribution to the Cold War. Cosford is uniquely placed to mark this period as the No 1 School of Technical Training’s fleet of training airframes plus the RAF Museum’s own collection are able to add many post war RAF types that simply cannot be seen at any other airshow. Some airframes are being brought in by road specifically for the airshow and these include the former RAF Leuchars resident, McDonnell Douglas Phantom FGR1 XV582 “Black Mike” as a Blackburn Buccaneer.

At the eastern end of the line of hangars an enhanced RAF Village will mark the “New Millennium” theme. This will be home to a display of very recent and current RAF machinery alongside exhibitions from various RAF units and trades. With one of the major aims of the RAF100 campaign to inspire the next generation, the STEM hangar which is located next to the RAF Village and will feature exciting interactive aviation activities for all the family. On top of the special RAF100 displays there will also be all the traditional hangar displays from the home based units too.

Cosford’s six hour flying display will feature a pageant of Royal Air Force history to mirror the ground show. There will be a number of rare historic aircraft joining the RAF100 celebrations including the Great War Display Team plus examples of the Supermarine Spitfire I and Bristol Blenheim from Duxford. For enthusiasts perhaps the star of the historic line-up will the UK public display debut of the Bristol 171 Sycamore from the Austrian based Flying Bulls collection. The Sycamore represents one of the RAF’s first rotary types and will see alongside other classic helicopters such as the Westland Whirlwind and Westland Gazelle.

Joining the historic aircraft will be a number of aircraft from some of the RAF’s international partners both in the air and on the ground. So far, the Polish Air Force who are also celebrating their 100th Anniversary in 2018 have confirmed a display by the MiG-29A Fulcrum and the Royal Netherlands Air Force will provide a flypast by a McDonnell Douglas KDC-10. Further international flying displays are expected to be announced soon. On the ground, the Pakistan Air Force makes its Cosford debut with a C-130E Hercules on static display alongside a Polish Navy An-28M1R Bryza. 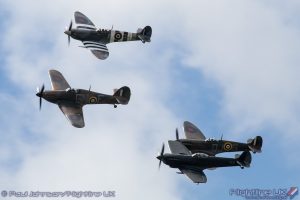 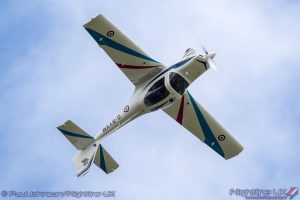 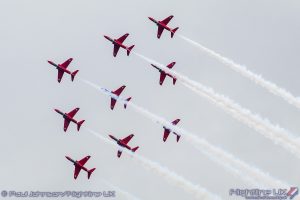 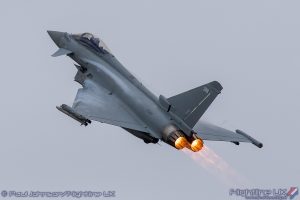 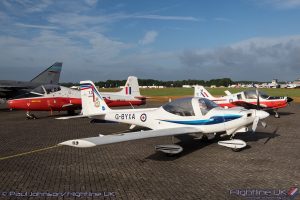 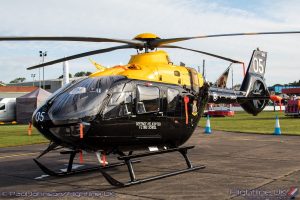 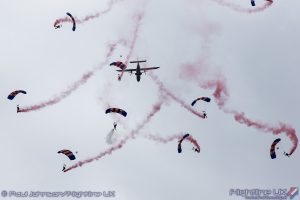 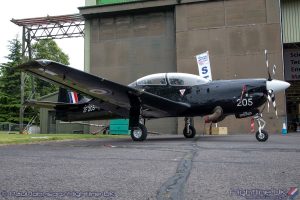 Completing the line-up of current RAF aircraft in the display will be RAF Chinook Display Team who were present at the media launch. As for all the other display teams, 2018 will be a busy season for the team with event commitments around the UK. 2018 will also mark the first season the RAF’s newest Chinook variant, the HC Mk.6, will be used for the displays. HC Mk.6 aircraft are new build aircraft purchased during the recent Afghanistan operations to bolster the UK support helicopter fleet. They feature digital flight controls and glass cockpits amongst other improvements. Older HC Mk.4 variants are currently being brought up to the same avionics standards as the new build aircraft and are known as HC Mk.6A in RAF service. 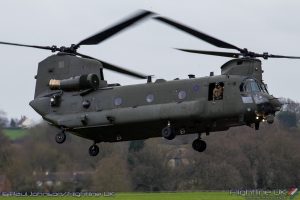 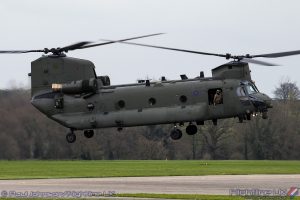 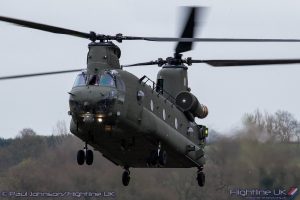 The Chinook display captain for 2018 is Flt Lt Stu ‘Kyno’ Kynaston. Cosford is a local event for ‘Kyno’ who grew up in near-by Shrewsbury. He is a training captain, instrument rating examiner and has completed four operation tours in Afghanistan as well as participating exercises around the world. Outside of the RAF, he is a keen long distance runner and has just completed the epic Marathon des Sables covering 155 miles in 6 days across the Sahara Desert. 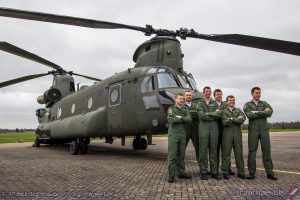 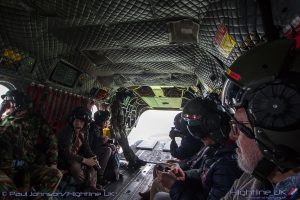 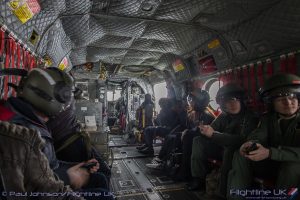 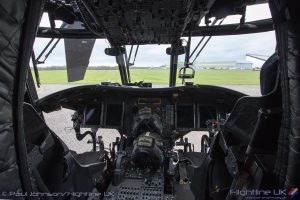 As the team is drawn from front line personnel based at RAF Odiham, other roles within the team are covered by one or more team members. The display co-pilots for 2018 are Flt Lt Matthew ‘Schmitty” Smyth and Flt Lt Andy ‘Donners’ Donovan. Normal operations see RAF Chinooks carry two Weapon System Operators in the cabin. However for display purposes only one is carried and throughout the season the WSO role will be shared by Sergeant James ‘Big K’ Kennedy, Sergeant Gav ‘Ando’ Anderson and Sergeant Dave Cawood. Finally, the display is supported by Team Manager Master Aircrew Vince Barlett, Team Supervisor Sqn Ldr Olley Leaming plus the engineering team of Sqn Ldr Paul Emerson, Chief Technician Marcus Ward and Sergeant Alan Brown.

The team are well into their display work-up to their public display authority which they aim to gain within the next few weeks.

The RAF Centenary has certainly sparked a lot of interest in the 2018 Cosford Air Show with the organisers reporting ticket sales were very busy. They stressed that admission tickets are only available in advance from www.cosfordairshow.co.uk and various local outlets prices £29. Accompanied children that are 15 or under are FREE!