Royal Air Force aircraft past and present will be out in force at RNAS Yeovilton International Air Day on Saturday 7 July but here’s a taste of its future: the state-of-the-art Boeing P-8A Poseidon courtesy of the US Navy Maritime Patrol Squadron VP-10, currently on its maiden European deployment, will be on static display.

Making its RNAS Yeovilton debut, the US Navy Poseidon is a cutting-edge, long-range multi-mission maritime platform. Carrying torpedoes, anti-ship missiles and depth charges, its roles include anti-surface and anti-submarine warfare, plus search and rescue and, whilst in RAF service, the protection of the UK’s submarines and aircraft carriers. 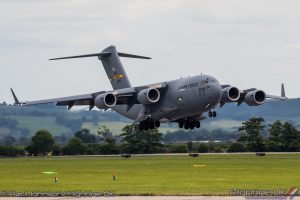 Also attending from the US Air Force is the huge Boeing C-17A Globemaster III from Joint Base Charleston’s 315thAir Lift Wing. With its impressive combined 170,000-pound cargo capacity and short, makeshift runway use capability it can be tasked with tactical airlift, airdrops, troop transportation and medical evacuation. Its cargo hold will be opened-up to walk-through at Air Day – a fantastic opportunity to see this very impressive strategic transport aircraft up-close.

These two US military aircraft will be joining other heavyweights in the static park, most notably the massive KDC-10 Extender from the Royal Netherlands Air Force. To give an idea of the sheer size of this incredible aircraft, it can also carry 65 tons of cargo or a mixed 30 ton/165 passenger load! The KDC-10 can offload an astonishing 1,750 pounds of fuel a minute, ‘topping-up’ NATO combat aircraft to extend their operational reach.

To book tickets and to see the full list of participating aircraft visit www.royalnavy.mod.uk/yeovilton-airday.