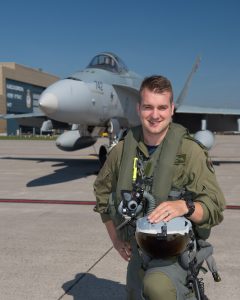 Captain Stefan Porteous has been appointed as the pilot for the 2018 CF-18 Demonstration Team. PHOTO: DND

The Royal Canadian Air Force (RCAF) is pleased to announce the appointment of Captain Stefan Porteous as the pilot for the 2018 CF-18 Demonstration Team.

“I am extremely honoured to have been selected as Canada’s 2018 National CF-18 Demonstration Team pilot,” said Captain Porteous. “I am very much looking forward to commemorating 60 years of NORAD at air shows throughout the summer while having the opportunity to be part of a highly dedicated team that will work together to put on thrilling performances aimed at demonstrating the professionalism and skill of the men and women of the RCAF. I look forward to meeting as many people as possible over the course of the coming demonstration season.”

The RCAF selects a theme for each year for its CF-18 air demonstration team and 2018 will feature the 60th Anniversary of NORAD.

Throughout the year, NORAD will hold several events aimed at highlighting the importance of honouring the past, guarding the present, and protecting the future.

NORAD is a combined, bi-national military command established by an agreement in 1958 between Canada and the United States to monitor and defend North America. NORAD is supported in Canada by the Canadian NORAD Region (CANR), headquartered in Winnipeg, Man., and the Canadian Air Defence Sector (CADS) at 22 Wing North Bay, Ontario.  CANR maintains CF-18 aircraft on standby at 3 Wing and 4 Wing  along with CC-130T Hercules air-to-air refuellers operating from Winnipeg, in support of the NORAD mission.

“As the Commander of the Canadian NORAD Region, I am thrilled to have the opportunity to showcase the important NORAD mission and our important bi-national partnership through the 2018 National CF-18 Demonstration program,” said Major-General Christian Drouin, the commander of 1 Canadian Air Division/Canadian NORAD Region. “The men and women of NORAD work diligently to keep watch over our countries and to protect the air sovereignty of North America. Twenty four hours a day, seven days a week, no matter what – we have the watch.”

Captain Porteous was born and raised in Comox, British Columbia – the home of the RCAF’s 19 Wing. Surrounded by aircraft from a young age, he was inspired to become a fighter pilot at age 11 after a family friend got him interested in military aviation. Upon turning 12, he joined 386 “Komox” Royal Canadian Air Cadet Squadron, and went on to earn his glider pilot license in 2004, followed by his private pilot license in 2005.

Captain Porteous joined the Canadian Armed Forces (CAF) in 2008 as a member of the RCAF. He continued to work in support of the Royal Canadian Air Cadets during his summers and, upon graduating from university, was posted to 4 Wing Cold Lake, Alberta, for on-the-job training. He began his RCAF flight training in the summer of 2010 at 3 Canadian Forces Flying Training School in Portage-la-Prairie, Manitoba, and completed training in 2011 at 2 Canadian Forces Flying Training School in Moose Jaw, Saskatchewan. In 2012, he was selected to fly jets and received his pilot wings in 2013 on the CT-155 Hawk aircraft.

CaptainPorteous’s many years of training culminated when he graduated from 410 Tactical Fighter (Operational Training) Squadron in Cold Lake, qualifying to fly the CF-18 Hornet in 2014 and finally realizing his dream of becoming a fighter pilot in the RCAF.

Today, Captain Porteous is a skilled RCAF pilot with combat experience, and he has trained across Canada and the United States. He is currently with 433 Tactical Fighter Squadron at 3 Wing Bagotville, Quebec.

Captain Porteous attended Comox Valley Elementary School, Aspen Park Middle School and graduated from Highland Secondary School in 2006. He earned his Bachelor’s degree in 2010 from the University of Victoria, majoring in history and classics.

In April, he will take to the skies over Comox,  where the CF-18 Demo Team will conduct its annual training before launching the 2018 air show season.