Tickets are now on sale for next year’s hugely anticipated Scampton Airshow!

Lincolnshire’s new airshow at RAF Scampton will take place on September 9-10 at the home of the Royal Air Force Aerobatic Team – The Red Arrows.

This exciting event, which will raise funds to support the RAF Charitable Trust, promises two fun-filled family days out each featuring a spectacular five-hour flying display showcasing exciting aircraft from around the globe. 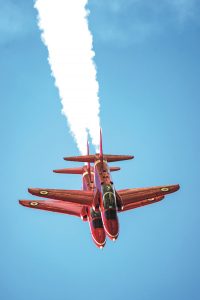 Airshow Director Paul Sall said that whilst it was too early to announce participating aircraft there was one display team he felt confident would star at the airshow. He said: “When looking at which exciting flying display participants we’d like to see featured at next September’s inaugural Scampton Airshow the Red Arrows naturally come top of our list. Like all other airshows, we will confirm next spring which UK and international aircraft will be taking part.”

It won’t all be about what’s going on in the skies above Scampton. On the ground, visitors will be swept along on an aviation journey through the ages, from a nostalgic Vintage Village – offering access to the station’s Heritage Centre – through to interactive and engaging exhibits from across industry in the Techno Zone.  There will also be the opportunity to learn about the modern-day Royal Air Force in the RAF Village where serving personnel will be on hand to give an insight into the many roles they perform.

Those looking to attend the show should note that tickets can only be purchased in advance at www.scamptonairshow.com. Tickets are priced at £39 with all under 16s able to enjoy the airshow free when accompanied by an adult ticket-holder.

Paul Sall added: “We think it’s important that every young person should have the opportunity to experience the magic of aviation, whether that’s in the air or on the ground. This is why Scampton Airshow admission will be free for all under 16s so as many as possible can enjoy a truly inspirational day out.”