The Royal International Air Tattoo (RIAT) is undoubtedly a major highlight of the year in airshows. 2014 saw the event celebrate the 40th Anniversary of the BAE Systems Hawk and the Locakheed Martin F-16 Fighting Falcon. However it was the celebrations of the Red Arrows 50th Display Season that provided RIAT with its major event theme.

Returning once again to produce the official souvenir DVD of the show were The Media Group. Coming in at a running time of just under two hours, it is fair to say the coverage is extensive. As with The Media Group’s other productions, there is a good amount of interviews and featurettes to tell the story of the Air Tattoo and the various displays. Such interviews include the story of “Billy Badger”, the mascot of RIAT’s Air Traffic team who has an extraordinary logbook plus pilot interviews with the Polish Su-22 crew, RAF Red Arrows and Typhoon pilots plus the Dutch and Turkish F-16 display pilots. The static display is not forgotten either with interviews with an RAF officer serving with the US Navy on the P-8A Poseidon and the support crew for the Textron AirLand Scorpion.

The flying displays are very well covered and the camera-work is very competent throughout. It is also good to see a wide variety of angles on the flying displays. However, what really stands out is the on-board footage. Cameras were carried on a great many of the displays with multiple angles both inside and and outside of the cockpit. There is some superb footage from the Polish Sukhoi Su-22 Fitter pair, the Breitling Wingwalkers , Patrouille Suisse and the three F-16s displays. The narration, provided by senior RIAT commentator Ben Dunnell is clear, informative and with some displays is augmented with live recording from the show of team commentary.

As a whole, the production flows well packing a great deal in to the 115 minutes. Unlike the 2013 production, special effects are using sparingly and do not detract from the filming. A small niggle is a very small number of odd moments mismatched sound dubbing – the Breitling Jet Team sound like they are flying much more powerful jets than the humble L-39!

Unusually for an airshow DVD, there are some genuine “extras” too that don’t make it into the main production including “The Story of Red 3 – Flt Lt Joe Hourston” and a more detailed look at the work of the Royal Air Force Charitable Trust. There is footage from many of the aircraft arrivals and departures; these are presented a short little films rather than one big presentation and so feel quite “raw.” However it good to see a record of some of the more outstanding aircraft such as the Hellenic Air Force A-7 Corsairs and the Japanese KC-767.

The Royal International Air Tattoo 2014 Official DVD is a superb record of the event. As well as competent filming of the flying, the quality of variety of the on-board footage really makes this DVD stand out giving the viewer a unique view of the flying displays and event as a whole. 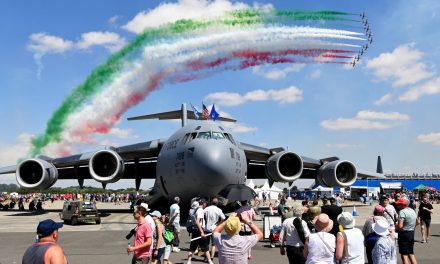