AIRSHOW NEWS: From Fabric to Fly by Wire – The Evolution of Naval Air Power represented at Air Day

From fabric and wires to fly-by-wire, almost 100 years of Carrier Aviation will be represented at RNAS Yeovilton Air Day on Saturday 26 July. With the Royal Navy’s next generation aircraft carrier being named on 4 July and edging closer into service, types as diverse as the WW1-era Sopwith Triplane, the cutting-edge Dassault Rafale and the Wildcat HM2 will highlight naval airpower, past, present and future, at the show.

100 years on from WW1’s start, in company with the Great War Display Team’s other replicas, the Sopwith Triplane will take Air Day’s visitors back to where Carrier Aviation really began. Come WW2’s advent, sleek and speedy monoplane fighters had largely replaced the biplane generation but, with its heroic attacks on the German battleship Bismarck and the Italian fleet at Taranto Harbour, the Fairey Swordfish proved an exception. Part of the locally-based Royal Navy Historic Flight’s fleet, the Swordfish will participate in the show, joined by the Flight’s Hawker Sea Fury and a Supermarine Seafire – just one of the D-Day anniversary themed aircraft involved this year.

The F/A-18C Hornet, extensively used by the US Navy for carrier operations but presented by the Swiss Air Force at Air Day, will put on a powerful display of speed and agility. The French Navy’s very welcome involvement brings two state of the art Rafale M multirole combat aircraft for static display in their only UK airshow appearance in 2014 so far confirmed. As ever, based assets will participate en masse with the Lynx Maritime Demo and the traditional show-closing Commando Assault showcasing present day Royal Navy operational tactics. Finally, the Royal Navy Black Cats’ newly-revised display sequence, with its Wildcat HM2 element, will offer a taste of Carrier Aviation yet to come.

Tickets for Air Day can be booked online at www.royalnavy.mod.uk/yeovilton-airday at the discounted advance rates (until 21 July) or by calling 08445 781 781. 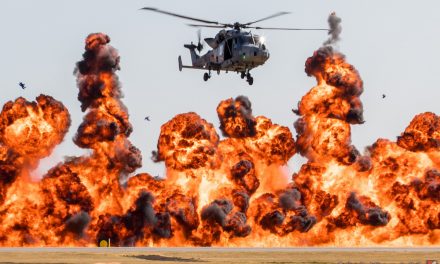