RNAS Yeovilton International Air Day 2014 is pleased to announce the participation of the world’s only airworthy Avro Vulcan B2 – XH558 ‘The Spirit of Great Britain’ in its flying display on Saturday 26 July 2014. Always popular with Air Day supporters the aircraft will also be available to view at close quarters on the ground too.

The Avro Vulcan was one of three ‘V bomber’ designs pressed into RAF service during the Cold War days as a nuclear strike platform. It was the 1982 Falklands Conflict that really propelled the type to stardom, when Vulcans carried out the longest conventional bombing missions in history. The RAF retired the Vulcan in 1984 but XH558 was kept active for flying displays until 1992. In the very late 1990s, a return-to-flight programme was launched, culminating in October 2007 when XH558 powered skywards again.

Now, this unique global survivor is kept alive mainly through enormous public affection and financial support but, being more than fifty years old, ‘The Spirit of Great Britain’ is fast-approaching its natural life’s end. Wing-strengthening plates added over the winter have given it two more years’ flying hours but, after 2015, XH558 is set to be grounded for good.

Given this scenario, the Vulcan’s involvement in Air Day 2014 is all the more timely. XH558’s thunderous and mesmerising performance will be one highlight of a five-plus hour flying display that, some four months before the show, is already shaping up well. Other classic British jet types may be added in due course, while flying display highlights so far announced include the Swiss Air Force Hornet Solo Display and the show-closing Commando Assault: Air Day’s explosive finale. 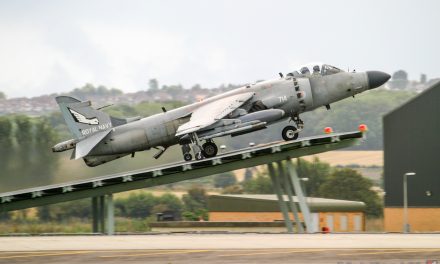