ONE of the largest Airshow’s in Europe has been nominated for a prestigious award.

Sunderland International Airshow has been nominated for the Tourism Event of the Year Award at the North East England Tourism Awards 2013. The event, organised by Sunderland Live, celebrated its 25th anniversary this year.

Chris Alexander, Sunderland Live’s Chief Operating Officer, said; “We’re thrilled that the Sunderland International Airshow has been shortlisted for the North East Tourism awards. We have some tough competition from other nominees including The Ashes at Durham Cricket Club and the Lindisfarne Gospels but it’s fantastic to be in such esteemed company with other prestigious events.

This year we celebrated the 25th anniversary of the International Airshow, which was a huge success, attracting over 850,000 people to Sunderland in July to enjoy live music, family entertainment and spectacular flying displays over the North Sea.”

“There were many highlights over the weekend including a rare evening display from the Red Arrows, one of the world’s premier aerobatic teams, the Battle of Britain Memorial Flight which paid tribute to the aviators of World War II as well as the Royal Netherlands Air Force Apache Solo Display Team 2013 of the 301 ‘Redskins’ Apache Squadron who brought an international element to the event and were the first Air Force worldwide to perform with the Apache helicopter.

Other highlights included; The RAF’s Tucano solo display, The RAF Falcons Parachute Display Team, SWIP Team, Breitling Wingwalkers and The Blades who made a welcome return to Sunderland in their original orange colours.

The North East England Tourism Awards will take place on 21 November and the winners will compete nationally against winners at the Visit England Awards next year. 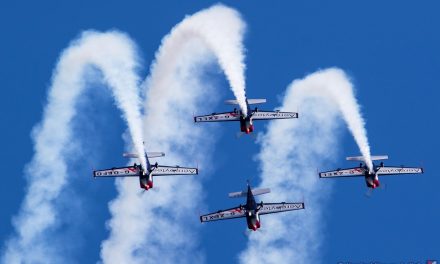