Not only does the Autumn Air Show (Sunday 13 October) close this year’s flying season but it also marks 40 years since the first air show was staged at IWM Duxford.

We’ve a huge number of aircraft taking part in the celebrations, including many of the types that were present at that very first air show on 14 October 1973.

We’re delighted to feature the English Electric Canberra XH134, owned by Midair Squadron, which flies for only the second time following a major restoration. It represents the Canberra that flew at that first Duxford air show under the auspices of No.100 Squadron.

The Gloster Gladiator was also one of the aircraft on display at that first air show. It is represented by The Fighter Collection’s Gloster Gladiator, which flew for the first time, following restoration, at this year’s Flying Legends Air Show.

It wouldn’t be an IWM Duxford air show without a number of Supermarine Spitfires taking to the air. Back in 1973, the RAF presented a flying display with one Supermarine Spitfire and a Hawker Hurricane. At this year’s Autumn Air Show, we present five Spitfires and a Hawker Hurricane, in our time-honoured tribute to the pilots who flew from RAF Duxford during the Battle of Britain.

The Royal Air Force has been present at many of IWM Duxford’s air shows since that first show in 1973. At the Autumn Air Show, the RAF is represented through a spirited display by a Shorts Tucano from 72 (R) Squadron, RAF Linton-on-Ouse.

Back in the 1970s, the sight of a P-51 Mustang was a rare treat on British shores. The first Mustang appeared at the Duxford 77 display, having flown across the Atlantic for the occasion. The North American P-51D Mustang which will display at the Autumn Air Show is now owned by resident organisation The Old Flying Machine Company. It was previously owned by The Fighter Collection, also based at IWM Duxford, and was the founding aircraft of that organisation’s fleet of aircraft.

If you’ve been to IWM Duxford air shows before, you are bound to have seen the rip-roaring performance by Heritage Aviation Developments’ Hawker Hunter Miss Demeanour, in its vibrant livery. A real crowd-pleaser, it flies at the Autumn Air Show to represent the RAF’s Hawker Hunter which flew at the 1973 Duxford air show.

In 1973, the Army Air Corps presented a helicopter handling demonstration with a Westland Scout helicopter. For our 40th anniversary air show the Corps presents a contemporary flying display by the AgustaWestland WAH-64D Apache helicopter.

The North American Harvard and de Havilland Chipmunk aircraft have been regular attendees at IWM Duxford air shows over the past 40 years. The Autumn Air Show features Harvards from resident companies The Fighter Collection and Aircraft Restoration Company. The latter also brings a de Havilland Chipmunk to the flying display.

Aircraft Restoration Company’s Messerschmitt Bf 108 Taifun first flew at Duxford in 1975. It was a regular sight at Duxford air shows under the ownership of Lindsay Walton and it will once again delight the crowds at the Autumn Air Show.

We also showcase a variety of the aircraft restored and flown by our flying partners, who have been an integral part of Duxford’s flying heritage for many of the past 40 years.

B-17 Flying Fortress Sally B has been resident at IWM Duxford since 1975, longer than any other airworthy historic aircraft. A great favourite amongst our air show visitors, Sally B performs an elegant display in honour of the thousands of young Americans who gave their lives in the Second World War.

Consolidated PBY-5A Catalina, operated by Plane Sailing Air Displays Limited, celebrated its 70th birthday in August. It has recently enjoyed worldwide celebrity, as it successfully completed the Circuit of Britain flight, 100 years after it was first attempted in a Sopwith Waterplane.

David and Mark Miller have been restoring aircraft at IWM Duxford for 27 years. Mark flies their de Havilland Dragon Rapide and also their Auster Autocrat G-AGTO, which has been based at Duxford since 1978.

The Grumman F8F Bearcat is one of the historic fighter aircraft most associated with IWM Duxford. It was amongst the first aircraft to be owned by The Fighter Collection and is most famous as the aircraft of choice for Stephen Grey when performing his famous ‘joker’ routine at the Flying Legends Air Show.

The Autumn Air Show also features a display by two Hispano Buchon 109 aircraft, operated by Spitfire Limited and Aircraft Restoration Company/Historic Flying Limited. The sight of the Buchon aircraft flying over IWM Duxford’s historic airfield is always instantly reminiscent of the legendary 1968 film Battle of Britain, which was filmed on location at Duxford.

Other exciting flying displays adding to the celebratory flavour include the Red Bull Matadors in their Xtreme XA41 aircraft performing spectacular aerobatics; the Boeing PT-17 Stearman from Golden Apple Operations Limited in its familiar blue and yellow livery; a pair of North American T-28 Fennecs from Radial Revelations and Groupe Fennec; FrazerBlades’ Piper L-4 Cub; the small but perfectly formed LeVeir Cosmic Wind operated by Pete Kynsey and Anna Walker, a graceful and fast aerobatic racer aircraft; the Nieuport 17 replica, star of the film Fly Boys; and the North American F-86 Sabre operated by Golden Apple Operations, which is the world’s only airworthy ‘A’ model. It carries the distinctive colours used by the United States Air Force in Korea and flies at the Autumn Air Show during the 60th anniversary year of the end of the Korean War.

With a wide range of activities to enjoy before the flying starts and the whole museum open to explore, why not join us to celebrate 40 years of air shows at IWM Duxford? 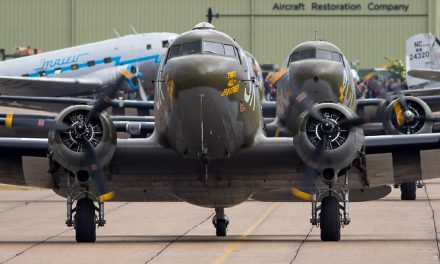