On Monday 27 May, the Eagle Squadron will carry out a commemorative formation flypast of American Second World War airfields to honour the American airmen who died whilst fighting for their country from British soil.

Leading the Eagle Squadron and B-17 Flying Fortress Sally B will be two-seater P-51 Mustang Miss Velma, which will be carrying a very special passenger, United States Army Air Forces veteran Clarence ‘Bud’ Anderson. The Eagle Squadron formation takes off from IWM Duxford at approximately 11.48am.

From IWM Duxford, the Eagle Squadron formation’s first destination is Bassingbourn Barracks, which was home to the USAAF 91st Bomb Group from August 1942 to June 1945. The 91st Bomb Group flew B-17 Flying Fortresses, the most famous of which was the Memphis Belle.

On leaving Bassingbourn, the Eagle Squadron will fly over Cambridge American Cemetery at Madingley, where a memorial ceremony is being held.

The formation then continues to RAF Mildenhall, home to the modern-day United States Air Force in Europe, and from there to Bodney airfield, which was home to the 352nd Fighter Group from May 1943 until V E Day.

From Bodney, the aircraft continue to RAF Snetterton Heath, which was used by the 8th Air Force 96th Bombardment Group from June 1943 until its deactivation in December 1945.

Then onwards to RAF Knettishall, which was built for the 8th Air Force during 1942-1943 with a specification to accommodate heavy bombers. It was home to the 388th Bombardment Group from June 1943 until V E Day.

The next destination is RAF Horham, which was handed over to the 13th Combat Bombardment Wing of the 3rd Bomb Division in 1942. Horham was mostly home to the 95th Bombardment Group (Heavy) which flew B-17 Flying Fortresses in bombing campaigns until V E Day.

From Horham, the Eagle Squadron over flies RAF Thorpe Abbots, which was originally built as a satellite station to RAF Horham.

The 100th Bombardment Group of the 8th Air Force arrived at Thorpe Abbots in June 1943. The Group earned the nickname The Bloody Hundredth due to heavy losses incurred during eight missions to Germany. A dozen or more aircraft were lost on a single mission.

The commemorative flight then continues to RAF Halesworth, which was home to the 56th Fighter Group, flying P-47 Thunderbolts, and then to the 489th Bombardment Group (Heavy), flying B-24 Liberators.

Following on from Leiston, the Eagle Squadron continues to North Weald airfield, which was home to two American Eagle Squadrons in 1940, flying Supermarine Spitfires.

The Eagle Squadron’s final destination before returning to IWM Duxford is RAF Debden. This airfield was home to RAF Eagle Squadrons which were later formed into the 4th Fighter Group when the USAAF took over the airfield.

On returning to IWM Duxford, the Eagle Squadron will perform a missing man formation and a display before landing. 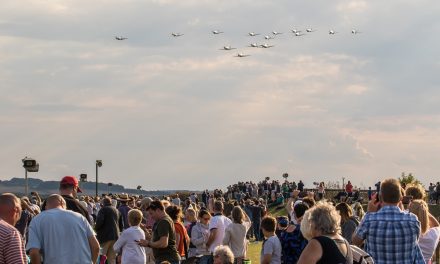 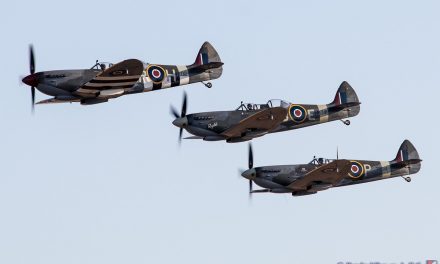