Thursday 15th November 2012 saw the Launch of the 2013 RAF Cosford Airshow at the sation hosted by the University of Birmingham Air Squadron. As well as announcing the themes of the show, cheques were also handed out to the two main RAF charities that benefit from the event, the Royal Air Forces Association and the Royal Air Force Benevolent Fund.

The RAF Cosford Airshow is one of ony three official RAF shows staged in the UK each year, and Cosford Air Show is the biggest aviation event in the West Midlands boosting the local economy by £1.5 million pounds. Each year the show features more than 90 aircraft and pulls in an audience of in excess of 40,000 from across the region and beyond. The airshow is staged to increase awareness and public understanding of the Royal Air Force, both in term of its current operations and for recruiting.

Sadly, low cloud a fog prevented a final flypast by the solo Hawk T1 display aircraft to highlight the link to the RAF Charities, but some of Cosford’s Jaguar fleet and a Harrier were on show for the invited press in the somewhat murky conditions.

The RAF Cosford Air Show Chairman, Wing Commander Mike Wilson, has announced the themes for the 2013 show. After a welcome from the Station Commander, Group Captain Jamie Johnston, guests at the launch of the 2013 Air Show were given an insight into the plans for next year.

As part of the celebrations of the 75th anniversary of RAF Cosford the Air Show will feature a special opening sequence flown by aircraft associated with the Shropshire base. There will also be extensive ground exhibits as a centrepiece featuring the work of RAF Cosford and the other military units based there giving local people the chance to see at first hand what happens year round at this highly advanced and technical training unit. Spitfire aircraft were also an important part of the history of RAF Cosford and 2013 sees the 75th Anniversary of the entry of the Spitfire into RAF service, giving the opportunity to commemorate this iconic aircraft type.

Other themes will include the Jaguar aircraft which will have been in RAF service for 40 years. Although no longer flying they are still used as part of the RAF engineering and technician training schools at RAF Cosford. At the 2012 show a taxiing Jaguar was a popular feature and guests at the launch were treated to a repeat of this demonstration which will also feature in the 2013 Air Show.

But the surprise announcement of the day was the introduction of a brand new crowd line enclosure to be known as The Cosford Club. With a maximum capacity of just 200, one lucky member of the Club will be selected at random to win the opportunity to spend a day behind the scenes at RAF Cosford. The day will include the unique chance to ride in the back of a taxiing Jaguar.

When Master Aircrew Chas McHugh was posted to the RAF Cosford Air Show team in March 2012 little did he know that his hobby and his job would become so closely linked.

As soon as the Air Show team discovered that Chas was a talented aviation artist he was the obvious choice to be asked to design the artwork flyer that will become the face of the 2013 RAF Cosford Air Show. He has been sharing the development of the pictures with Air Show supporters through the website and his Facebook pages

Chas, who has lived in Shropshire since 1996, has served in the Royal Air Force for 35 years and is a helicopter crewman instructor in his day job. As part of the Air Show team he is responsible for the operational aspects of the event and works closely with the operators of the visiting aircraft and the Flying Display Director

Chas says “I received no formal art training but just developed my style over the years. My love of painting and involvement in flying led me naturally into specialising in aviation art.”

For more information about Master Aircrew McHugh and to see other examples of his work, visit his website http://www.aeroartist.com

Today’s announcement from the RAF Cosford Air Show will bring an economic boost of around £1.5 million to the region.

The organisers have announced that the West Midlands’ biggest aviation event will take place on Sunday 9th June 2013. The Air Show is returning to its traditional weekend following the change in 2012 to accommodate the Jubilee celebrations.

The RAF Cosford Air Show brings up to 50,000 visitors to the area providing additional income to many local hotels and businesses. In addition, a significant number of the Air Show contracts are awarded to local businesses from waste management and catering to equipment hire and printing.

Air Show spokesman, Amanda Butcher, said today that the event is very much part of the local community. As well as bringing money into the region it is a chance for the people of the West Midlands to see the work of the RAF, and RAF Cosford in particular, at first hand. 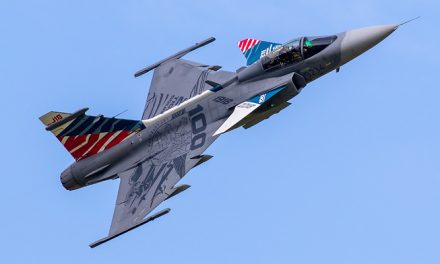