AIRSHOW NEWS: Celebrating the iconic Spitfire with a day of nostalgia at IWM Duxford

We’re thrilled to be presenting a brand new event, Spitfires, Merlins & Motors, on Sunday 5 August. We’ll be celebrating the legendary Supermarine Spitfire, the unmistakable Merlin engine and the close relationship between this classic flying machine and the four-wheeled speed demons of the golden age of motoring and beyond.

Between 10am and 1.30pm, see a number of historic Spitfires up close on static display, including the rare Spitfire Mark 1a from Aircraft Restoration Company, the Mark V from Historic Aircraft Collection, Mark IX fromthe Old Flying Machine Company, Mark XIX from the Rolls Royce Heritage Trust and Mark IXT from Air Leasing.

At various points throughout the afternoon, these Spitfires will be taking to the skies to perform short displays. Also flying will be the Battle of Britain Memorial Flight Spitfire.

Aircraft Restoration Company is offering a rare opportunity to sit in a Spitfire. This costs £15 per person and includes a souvenir T-shirt and photo opportunity. All proceeds go to the Blenheim Restoration Fund.

There will also be the chance to see a Merlin engine erupt into life as it will be on dynamic display throughout the day.

Living history groups will be bringing RAF Duxford’s wartime relationship with the Spitfire to life with evocative displays.

The Military Equipment Collectors will be recreating the role of the RAF ground crew who kept Spitfires constantly at scramble readiness throughout the Battle of Britain and beyond. They will be displaying an RAF Mobile Mechanic Unit with early Second World War field equipment.

Past to Present Historical will be representing the 1940s Home Front with a dashing RAF pilot costumed character, a jolly tent where you can try your hand at wartime games and a very worthy Women’s Voluntary Service representative who is collecting saucepans for Spitfires.

There will be a display of glorious vintage Rolls-Royce cars alongside hundreds of stunning vehicles, from pre-war vintage to contemporary classics. The Veteran Cycle Club will be displaying a range of traditional bicycles and chatting about the history of cycling.

Discover Vintage presents a fabulous vintage fair in the Conservation Hall in AirSpace. Exhibitors will be selling vintage fashion, homeware and curios fromthe 1930s to the 1950s. Enhancing the nostalgic atmosphere will be a gramophone DJ and singing group.

Between 10am and 2pm, in the Visitor Centre, author Andy Saunders will be signing copies of the extraordinary new book Spitfire Mark I P9374 – The remarkable story of how a unique aircraft returned to flight. Also present will be Martin Overall, Historic Flying Limited’s Chief Engineer, who oversaw the restoration of this incredible aircraft, and who contributed significantly to the book.

There will also be traders selling a range of wares. Vector Fine Art will be hosting a signing session with a number of Battle of Britain veterans. There are lots of fun things for all the family to do together. At the Airfix Make and Paint Zone between
11amand 3pm, visitors can make their own model aircraft, paint it in a range of colours and take it home as a souvenir of a fabulous day at themuseum. There are also fun craft activities to try your hand at.

In the American Air Museum between noon and 4pm, we’ll be seeing if you have what it takes to become a SecondWorld War special agent and putting you through your paces to undertake secret operations in enemy territory. See the imaginative gadgets used by the Special Operations Executive, send covert messages in Morse code and undertake a cloak-and-daggermission which will prove your expertise in espionage.

Join us for a fun and nostalgic day as we celebrate a golden age of style, elegance and daring do! 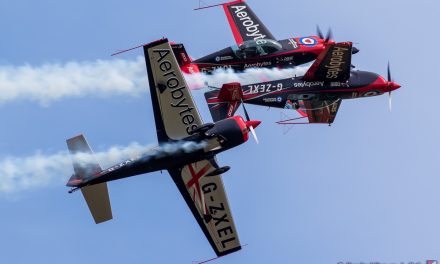