﻿﻿﻿A FICTIONAL fast jet pilot named ‘Ace Mandala’ has been unveiled as the face of next summer’s Royal International Air Tattoo at RAF Fairford, organisers have announced.

Ace will feature prominently on billboards, in advertising and on poster sites around the UK in the run-up to next summer’s airshow on July 7-8.

Ace is the creation of renowned artist David Bent, who was inspired following a trip to RAF Akrotiri in Cyprus in 2007 at the invitation of the Red Arrows. The Red Arrows first saw David’s work on display at the Air Tattoo and shortly after his visit to Cyprus, the artist was invited to become the Reds’ artist in residence.

It was whilst photographing one of the display pilots in his Hawk jet that the idea for Ace came. David said: “Although Ace made his first appearance on the 2011 posters we hadn’t given him a name or an identity. I believe he symbolises all the skilled, adventurous and brave airmen who fly. We decided we’d develop him as a character so that he could become the face of the Air Tattoo. Ultimately, I hope Ace will be to the Air Tattoo what The Stig is to Top Gear.”

Air Tattoo Marketing Deputy Director Helen Webb said when she first saw David’s artwork she was immediately struck by his vivid use of colours and his ability to convey all the excitement aviation has to offer. She said: “We felt that if David could apply the same eye-catching techniques to creating a poster image for the Air Tattoo then it could have a big impact. In the past, members of the Red Arrows have said their journey to becoming a world-class pilot was first inspired by a visit to the Air Tattoo. By bringing ‘Ace Mandala’ to life, we hope to convey the sort of excitement and thrills that can spark the imagination of a future fast jet pilot.”

Next summer’s Air Tattoo on July 7-8 will see the airshow join forces with the Royal Air Force to stage a special Diamond Jubilee celebration in honour of Her Majesty The Queen.  A limited number of special Super Earlybird tickets, priced £29, are available by visiting www.airtattoo.com or by calling 0800 107 1940. All tickets must be purchased in advance. All accompanied under-16s go free. 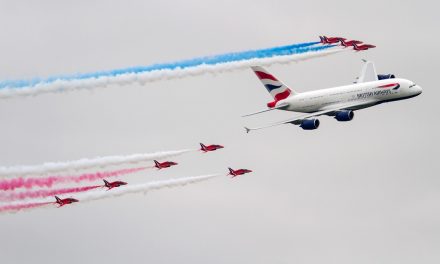